Biomass, easily misunderstood even by the pros.

The word “biomass” gives people a clean and eco-friendly image.

However, in reality, it is just another ordinary thermal power plant.

We had also interviewed the Energy Policy Division of Kyoto Prefecture when we first started this opposition movement.

The person in charge states “It is at least better than coal power stations.”

When even the department in charge has only this much understanding of palm oil power plants, it is no wonder that many people are misled into thinking that they are fine.

The palm oil for a power plant will be transported by tankers from Indonesia.

The amount of greenhouse gas emission of a palm oil power plant, including the tankers’ one, is higher than a gas-fired plant and is little less than an oil-fired plant.

The rain forests are burned deliberately in order to make an oil palm plantation.

To create oil palm plantations, they cut down trees and burn a vast area of tropical rain forests.

Oil palm plantations destroy living things in the forest, which is inexpiable.

Did you know that tropical rain forests have a role in absorbing greenhouse gas?

Peatland next to the rainforest.

Decomposed tress pile up and emit greenhouse gas but, rainforests are formed on them and cover over it.

Cutting down the trees in the forests and breaking ground peatlands causes greenhouse gas kept underground to be released, and that amount is 20 times greater than fossil fuel emits.

Peatland contains charcoal, which is flammable.

Flying sparks during slash-and burning to make an oil palm plantation may start a fire on the rainforest around the plantation area.

The emission of greenhouse gas caused by only fire in the forests and peatland in Indonesia in 2015 is estimated at over 1.75 billion tons.  It is far more than Japan’s total annual emissions of about 1.40 billion tons.

Needless to say, greenhouse gases are emitted during the process of producing palm oil.

Any fuel gives off a certain level of greenhouse gas.

Palm oil has more problems such as discharging raw palm oil mill effluent, which causes severe damage to the environment and resulting in methane gas emissions.

Palm oil will be transported by tankers from Indonesia or Malaysia.

Palm oil thermal plants emit a large amount of greenhouse gas in each process of production. 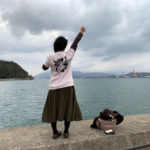